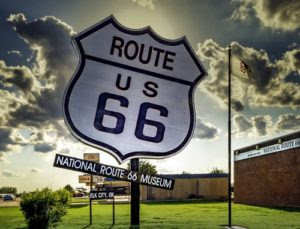 The National Trust for Historic Preservation on Tuesday included Route 66 among its annual 11 Most Endangered Historic Places list and urged Congress to name it as a national historic trail.

It was the second time Route 66 made the National Trust’s most-endangered list. A smaller part of the Mother Road made the list in 2012.

For more than 30 years, the National Trust has released its annual most-endangered list. The nonprofit organization notes of the more than 300 places listed, just 5 percent have been lost.

The National Trust stated this about its listing of Route 66 on the list:

Known as America’s “Mother Road,” Route 66 is an internationally significant symbol of our nation’s romance with the open road. While Congress has taken important steps to designate Route 66 a permanent National Historic Trail, which would bring national recognition and economic development to the route’s historic sites, legislation must be passed by the U.S. Senate and signed by the president before the end of 2018. Otherwise, a vital preservation opportunity may be lost.

The National Trust urged readers to sign a petition to support the historic-trail legislation. A big impetus behind the bill is the impending loss of the Route 66 Corridor Preservation Program, which is scheduled to expire in late 2019.

The U.S. House of Representatives a few weeks ago passed the bill by a voice vote. The measure is being considered by the Senate.

The Route 66: The Road Ahead Partnership, which has lobbied for the bill, posted this comment from a National Trust official in a news release:

“Route 66 has fueled America’s imagination, popular culture, and passion for the open road for nearly a century,” said Stephanie Meeks, president and CEO of the National Trust for Historic Preservation. “It deserves a place not just in our rearview mirror, but on our roadmap of unique travel experiences for generations to come. For over 30 years, our 11 Most Endangered Historic Places list has called attention to threatened one-of-a-kind treasure throughout the nation and galvanized Americans to help local communities save them. As it has over the past three decades, we hope this list inspires people to speak out for the cherished places in their own communities that define our nation’s past.”

“The reason we decided this year to list the entire route is that, in addition to losing little parts of the historic interest here and there, is a very specific threat right now. The best alternative would be to try to have it added as a National Historic Trail. That’s designated by an act of Congress, so it’s no small lift.”

If enacted, Route 66 would be the 20th historic trail in the United States and the second that traces its origins to the 20th century. The other 20th-century trail is the 54-mile Selma to Montgomery National Historic Trail. More about the benefits of a national historic trail may be read here.

Bill Thomas, chairman of the partnership, stated in the release:

“Over the past two decades, there has been a resurgence of interest in Route 66, making it one of the most popular heritage tourism attractions in our country and the world. Many historically important properties and alignments of the Mother Road, however, are in danger of being lost. The recognition from Route 66 being placed on the Trust’s 11 Most Endangered list will help focus attention on the work needed to preserve these significant pieces of American history.”

Webb told the Tribune the slow but consistent loss of historic landmarks on Route 66 also was a reason for the Trust’s listing:

“The threat to Route 66 has really been a slow burn. It has been tough for these smaller businesses all along Route 66, and over the years there have been different authentic elements that already have been lost. People have this vision of taking the iconic road trip along Route 66, and it would be a shame if they did only to find too many places were lost and can’t be revitalized.”

Other places that made the National Trust’s endangered list were:

(Image of the giant Route 66 shield at the National Route 66 Museum in Elk City, Oklahoma, by Steve Walser via Flickr)